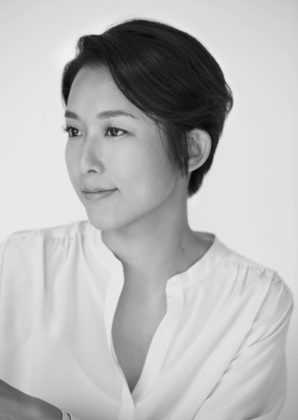 Born in 1981, Kiyomi Suzuki studied architectural design at Tama Art University, and moved to France in 2005 to work for Ateliers Jean Nouvel, as she was fascinated by his ideas concerning light and architecture.
After working on collective housing and hotel projects in Barcelona, New York and other cities as a member of the Ateliers’ lighting team, she moved to the design team to work on design competition proposals, such as the high-rise office building project in Paris and the National Museum in Qatar. During her four years in the Ateliers, Suzuki focused on creating playful relationships between material and light in both large-scale architectural projects and interior designs, such as her space designs for the Milan Furniture Fair. She also took note of the effects of indirect lighting in a variety of buildings in her daily life in Europe.
These experiences in Paris led to her interest in pitch-black carbon fiber, a new material. In 2009, she joined Ishimaru, the company that produced and manufactured many products designed by the late Shiro Kuramata. The company has been engaged in developing new materials such as acrylic. Thus, her interest in carbon fiber and the passion of Takao Ishimaru, the president of Ishimaru, for the material were linked.
A project to design a new product with the new material began immediately. Suzuki often visited the factory to interact with artisans, and was impressed by their devotion to craftsmanship and meticulous ways of processing the material. After working on a number of life-size drawings, models and mock-ups, in 2009, her Cherche Midi chair, made solely of carbon fiber, was born. Weighing only 960g, the chair has a light, strong yet flexible body, with a silvery surface that looks like it’s been dipped in pitch blackness. This was one of the fruits of her adventures studying light and materials in Paris and Tokyo.
She went on to create many products over the following eight years, including a table, the reception counter and benches at the entrance of the Shiseido Ginza Building, with a design that combines new materials with technologies in innovative ways. She also created a sofa in which she achieves beauty by connecting different materials.
In 2017, Suzuki decided to turn to wood, the traditional material of Japan, her home country, to rediscover her roots after years spent overseas. She moved to Kyoto, where a number of historical buildings have been preserved, and is now exploring new designs for the future.

ネ菴 (Né Un) is the design studio Kiyomi Suzuki established in Kyoto in 2017. The name conveys her design philosophy.
ネ, a katakana character pronounced “ne” in Japanese, is derived from 禰, the ancient Chinese character, a pictograph of a platform on which one offers beautiful flowers to the gods. Inspired by the notion that flowers, plants and nature are not only beautiful, but also perfect in their forms, Suzuki seeks to create unique designs for products, interiors and architecture that can serve as platforms for beauty.
菴 means a “hut” or “little place,” but she uses the Chinese character in its ancient form with the grass radical at the top, as a reminder that Suzuki considers her designs to grow naturally, like plants. She wants Né Un to be a salon where creators can gather to generate the chemistry that nurtures design evolutions, while being aware of ever-changing seasonal beauty.
“Ne” is also related to “né” in French, meaning “to be born,” and “un” resonates with the indefinite article “un,” which means “one.” This reflects her ambition to explore the characteristics of each material as deeply as possible, creating a design that draws out its potential.
At the center of her activities lie her experiences with light and darkness. A weak light can be felt when it is reflected on the surface of the material, goes through a transparent material, or is absorbed into a pitch-dark material. This type of light creates a fascinating expression on the material.
Light and darkness create different expressions depending on how they are viewed. Light may dissolve into or emerge from the darkness of the material, thus changing the impression of the space. For Suzuki, the subtle interplays of light and darkness are crucial to her design process.